What to Do If You Are Stalled in a Highway

MINNEAPOLIS, Minnesota. The new Netflix original, Shot in the Dark, follows the lives of “stringers,” freelance journalists who chase car accidents, burning cars, and high-speed police arrests on LA’s late-night street. The show is Fast and the Furious meets Cops. After watching a few minutes of the first episode, you start to get a feel for the pace. The cameramen hear a call over the police radio: a car fire, a DUI, a motorcycle accident, and they race to the scene. But then, in the last few minutes of the first episode, something remarkable happens. One of the stringers gets a call reporting a stalled car. He rushes to the scene and films the car stalled in the road. It is a clearly dangerous situation. Cars speed by on the LA freeway. Then, one car sideswipes the vehicle, a hit and run caught on film. The stringer holds his camera steady. Suddenly, the car is struck directly, and it spins toward the median where it bursts into flames. Someone is trapped inside. 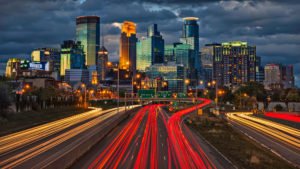 The cameraman rushes across several lanes of LA highway and somehow manages to pull the man from the burning vehicle. Everything is caught on camera. The next episode traces the emotional repercussions on the stringer, who has suddenly found himself on the wrong side of the action.

The show is fascinating, but it does raise a question for the personal injury lawyer. What should the driver in the stalled vehicle have done? The driver remained in the vehicle, which protected him from a potentially deadly pedestrian collision, but remaining in the vehicle didn’t protect him from the potential impact of other cars that would not see the stalled vehicle in time.

According to Consumer Reports, the steps drivers take when a vehicle stalls, but before the vehicle stops, can make a big difference in the outcome. For example, your car may take some time before it comes to a complete stop. Try to pull over into the shoulder of the road if at all possible.

A car can stop in the middle of the highway for many reasons. General Motors recently recalled 1.6 million cars with faulty ignition switches, but a car can stop if it runs out of gas or if the fuel pump is broken. So, regular maintenance on your car can prevent it from stalling, and always keeping at least a quarter gallon of gas in your tank can also protect you from running out of fuel.

The Law Office of Martin T. Montilino are personal injury lawyers in Minneapolis, Minnesota who work with car accident victims to help them get the recoveries they may deserve under the law. In some instances, vehicle stall outs are the result of defects in the car or poor maintenance work. If you believe another person’s negligence or neglect resulted in your stalled vehicle accident, visit our firm at https://www.martinmontilino.com/ to learn more.